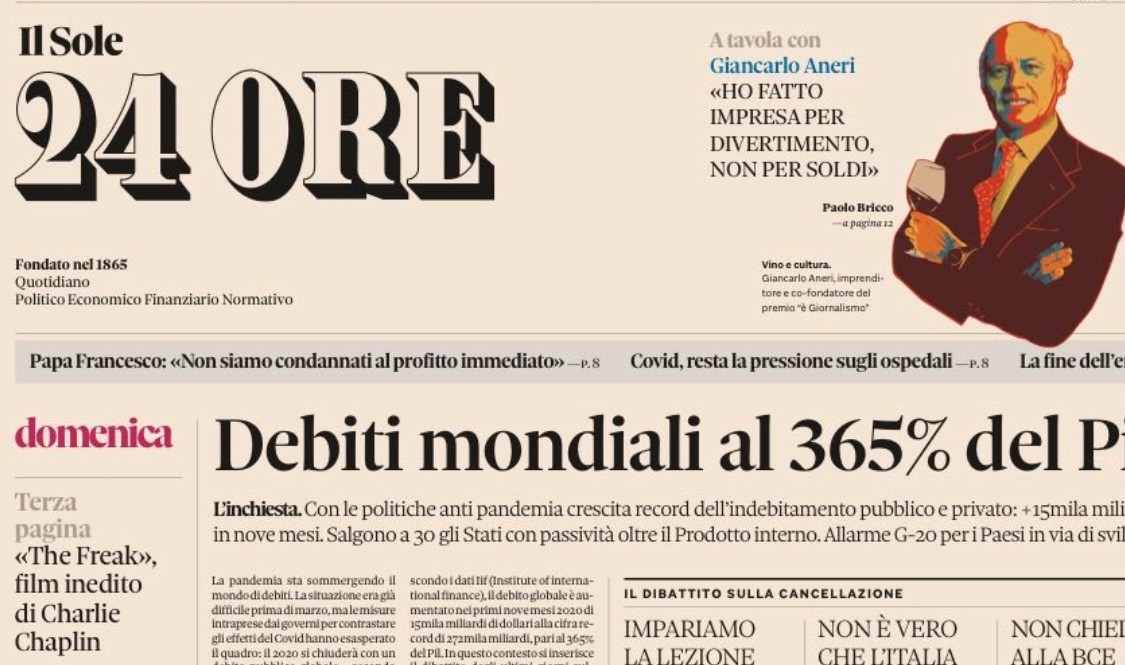 ………………..On the table, natural water for him and sparkling water for me. “Before we start eating, I want you to taste the Aneri Prosecco Organic Leone, dedicated to my nephew Leone,  my daughter Stella’ son ,” he says while the waiters bring the caramelized Russian salad, a classic of Cracco’s cuisine. Giancarlo Aneri – until he was 45 years old, manager of Ferrari Spumante in Trento, which he left as vice-president to start his own business (“one of the few mistakes of my life, I should have started five years earlier, inside I always felt like an entrepreneur”) – has a character and a playfulness, a cunning and sometimes a melancholy that make him an Italian type, between the “commedia dell’arte and the melodrama of Verdi”, the Italians of the economic boom and the films of the last period of Federico Fellini. He founded companies: in the first one, twenty-five years ago, the partners were Giovannino Agnelli (“a person of a unique education and elegance, a true great bourgeois”, Giancarlo is moved by recalling the first of the Agnelli who died tragically) and Luciano Benetton (“were true the stories that Giorgio Saviane made, of the lunches of all of us friends with him sitting at the head of the table like a silent king in the villa in Ponzano Veneto”). He connects different worlds: he brings together the wealthiest financiers and engagé writers, cooks and great industrialists, artists and men of power. He solves problems, as when he helped Vittorio Feltri save TV presenter Michelle Hunziker from a sect.

He does all this with a generosity without shadows – not, as happens to many of these chameleons, to unite and then divide and then unite again – but simply to unite: “I try to make friends with everyone and, if two people quarrel, I always try to make peace. Sometimes I feel like a missed priest”, he says with the simplicity of popular Catholicism proper of the Venetians, he who lives – with his whole family – and has the company in Legnago di Verona, halfway between Verona and Rovigo.

The egg with truffle arrives on the table, accompanied by Pinot White Leda (from his wife’s name). “Before the professional activity, before the company and before the love for publishing and journalism – says Giancarlo – there was my family of origin. We lived in the Veneto countryside. My father Primo was stationmaster. My mother Renata was a housewife. We had a dignified but humble life, we had to arrive every time on the 27th of the month. Now that I have become a bourgeois without thoughts, I remember those years well. Underneath the house there was a newsstand. My father took the Unit. When I was ten years old, I bought Il Corriere della Sera for the first time. The first glass of wine, cut with a drink for boys called Spuma, I drank when I was fourteen. But, already for four years, I had been reading Indro’s reportages”.

And so, while the waiters bring the truffle tagliolini with Pinot Noir Ale (in honor of his son Alessandro), Aneri tells where the thread came from that woven his canvas between public and personal life, editorial offices and private homes, interests and loyalty to friendships: “It’s very simple. I have always personally followed the diffusion of my wines on foreign markets, both in the company I worked for and then in my own company. Did I go to New York? Did I spend a week in Paris? Did I spend a few days in London or Madrid? In addition to going around the great Italian and international restaurants to sell my labels, I was trying to get to know the correspondents of Italian newspapers. Nobody else did it. Those journalists were often intrigued by this traveling Italian wine salesman. They looked at me with sympathy. I would tiptoe into their daily life. And, while I was there with them, I found myself living the most particular episodes. When in New York Mikhail Kamenetzky, who to everyone was Misha or Ugo Stille, was warned that his house was on fire, I was in the cab with him.

With Vini Aneri, Giancarlo produces Prosecco and Amarone della Valpolicella. With the E-Group oil and coffee roasting. He does all this according to a precise business model. What economists call “high added value segmentation”. But which, from the historical point of view, is the long-term outcome of a story, the Italian one, in which the canon of small size allows to combine formalized knowledge and informal culture, territories and global markets, with the village – in this case Legnago di Verona – as the fulcrum of many things because, as Carlo Cipolla wrote, “Italians have been used, since the Middle Ages, to produce, in the shadow of bell towers, beautiful things that please the world”. “We have small numbers”, says Giancarlo, while the waiters of Cracco bring the list of sweets. And he says: “Our annual turnover is 7 million euros. At least once a year I receive an offer to sell to a private equity fund or a large group, for which a business with our sign of luxury would be the icing on the cake and the completion of an offer that usually reaches another type of clientele. We are often the missing link for the food giants. I have always said no. Because the entrepreneur, especially Italian, does not sell. He never does. I didn’t do all this for the money. I did it to have fun and to build something new, to get to know the world and to leave, when I am gone, a living and vital reality to my children Alessandro and Stella, my granddaughters Lucrezia, Ludovica and Giorgia and my nephew Leone. My wife Leda, Alessandro and Stella, and I, are on the board of directors.

A steamed tiramisu, two coffees and a small pastry shop come to the table. And Giancarlo Aneri thinks with happiness, melancholy and an unquenchable desire for the future of that day when “we were at the table, Ugo Tognazzi, Ottavio Missoni, Enzo Biagi, Roberto Bettega and Enzo Ferrari, talking about wine and cars, food and love”. Because, as someone said, “in my land, only what I am will help me to live”. That goes for him. It applies to all Italians. Yesterday, today and tomorrow. 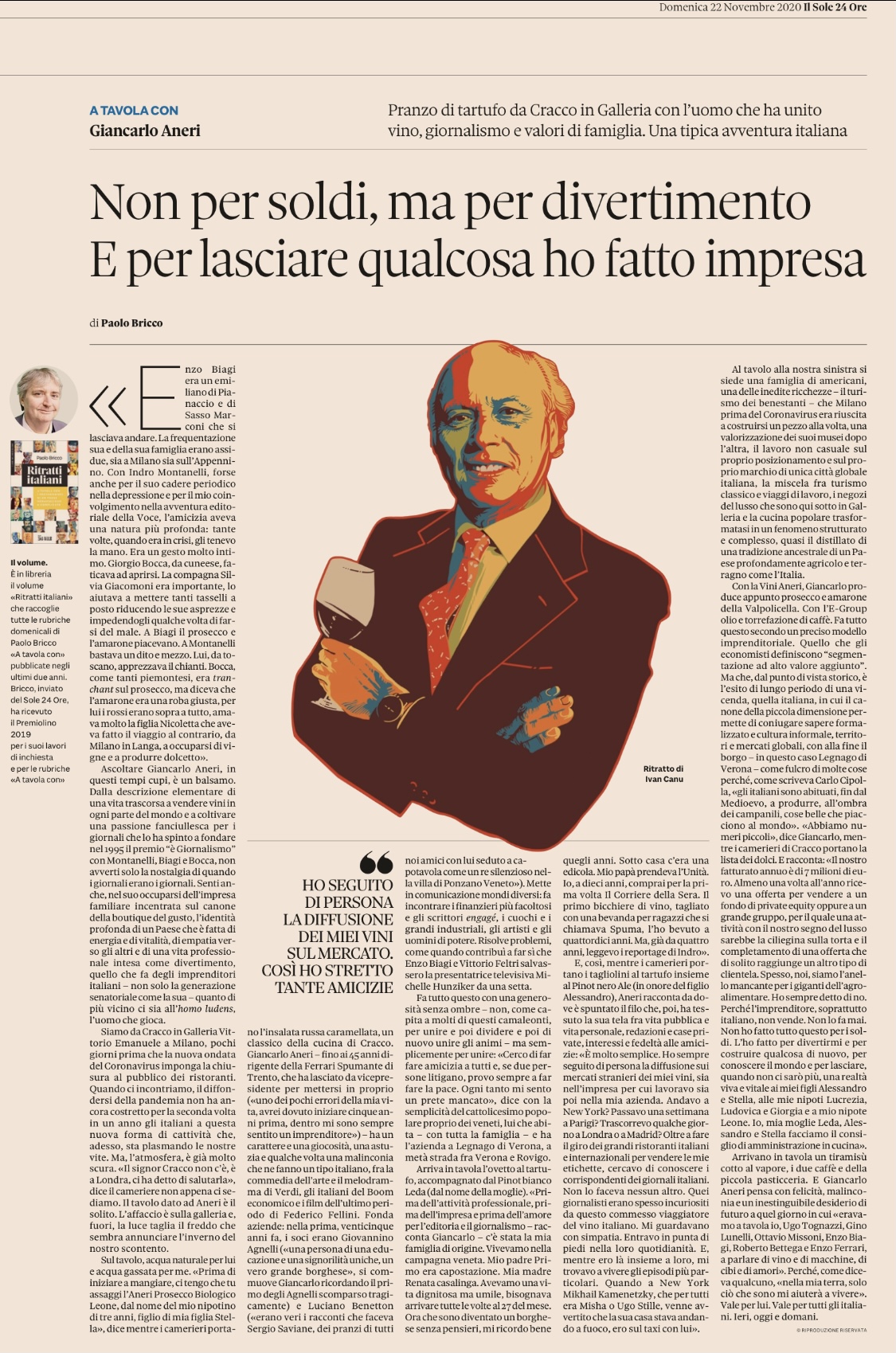